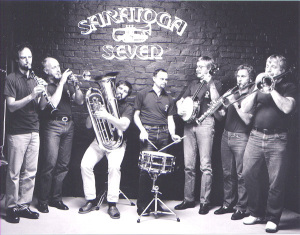 The SARATOGA SEVEN Jazzband was founded in 1973.

Since that time, the Brunswick Formation has been one of the best known ones in their region. In the early days the band was filled by a pianist.

Following the departure of pianist, she played many years in the oldtime classical to jazz six occupation.

In the first years their style was influenced by Louis Armstrong, Eddi Condon and later by Chris Barber and the Dutch Swing College Band. In the course of time, the group developed their own distinctive style that makes them so popular. 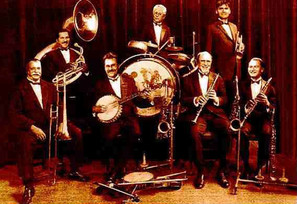 The name „Saratoga“ is derived from a street in New Orleans, where they have already appeared as street-musicians. Duke Ellinton composed the title „Saratoga Swing“.

Saratoga is also a small town in the state of New York. It was here in 1777, that one oft he decisive battles oft the War of independence in North America against the brit. colonial army took place.

Appearences at national and international festivals such as in Dresden 1998 and 2008, and many other German cities took the band far across the border of Northern Germany and built up a good reputation. In 2007, the band was elected the most popular oldtime jazzband oft the Brunswick region at the courtyard party oft the Wolters Brewery. 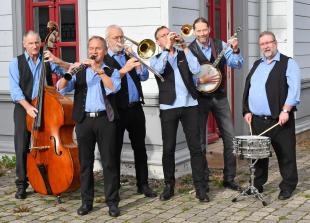 Guest performances took them halfway around the world. They jazzed in England, France, Holland, Spain, Sweden, Finland, Denmark, Estonia, Romania and in America. There, too – and that they are particulary proud of – in New Orleans, the birthplace of jazz.

One oft the great moments of the band were joint  performances with many prominent jazz musicians, such as Beryl Bryden, vocal – Errol Dixon, piano – René Franc, sopran-sax and one of the best drummer in Europe, Huub Janssen, from the Dutch Swing College Band.